skip to main | skip to sidebar

The Longest War in American History in Afghanistan. Every soldier has an incredible Story to tell.
Desperate Lands: The War on Terrorism Through The Eyes of a Special Forces Soldier. 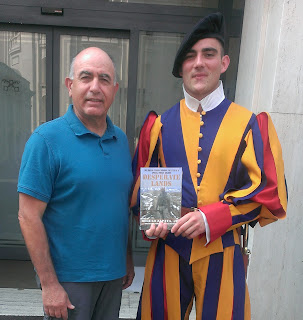 Vactican City-Rome Italy. Salute to Regitment Vatican Swiss Guard - (Ramen) during tour of duty at the Basillica - Vatican. A Salute to this soldier and I Thank you for your Dedication and Service to the Vatican. I Greatly appreciate you reading my book "Desperate Lands: The War on Terror Through The Eyes of a Special Forces Soldier." 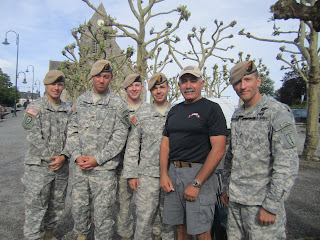 Warriors Reunion in Normandy France with Regulo Zapata, Book-Author: Desperate Lands: The War on Terror Through The Eyes of a Special Forces Soldier. Incredible U.S. Army Ranger reunion at St Mere Eglise, Normandy France on June 6, 2012. It was such an Honor and Privilege to linkup with Active Duty U.S. Army Rangers from Ft. Benning Georgia during the opening ceremony. A salute to these great warriors and Thank you for your Dedication and Service to our Nation.

This series of Anet newsletter is happy to announce, Three U.S. Army Rangers attending the Lost Patrol Ranger Reunion in June are authors sharing parts of their military experience.

Desperate Lands by Regulo Zapata Jr., A Warriors Trail, Strike Always from Shadows by Steven Mattoon, and The Dirty Dozen by Larry Jordan.

"A MUST READ" (5-Star) Rating recommedation on these three Historical Bestseller phonamenal books on understanding a Special Forces soldier combative fighting techniques behavior, surviving and executing combat operations in Afghanistan and Iraq. A must add to your reading list.

To Join and subscribe to the Anet known as "The Footlocker" go to: https://www.rangermemorial.com/services.aspx

Author Steven Mattoon does an extraordinary and brilliant depection in writing and presenting such an incredible and intense true-story on the Art of War as a warrior. The author takes you in a journey into the early days of Vietnam to the present battlefields in Iraq.

Altogether, the story is an unprecedended work of art, action packed and immediately captures the reader's attention and is able to envision every scene as if you were part of the missions. Your heart beats faster in escape and witness of the horrors of death and fear in the battlefield.

The characters are realistic that you could feel, smell and share their emotions during their survival and facing death from the enemy and hostile environment!

The book gives you a fascinating glimpse, as to the different battles, and skirmishes, taken place when confronted by the enemy. You are confronted at the same time facing hostile enemy situations and making split second life or death decisions in the battlefield.

The book gives a perspective look at the enemy’s attitudes and ideals, their way of life and methods of warfare, and survival as they appeared living in the battlefield away from world civilization.

"A Must Read" (5-Star) Rating recommendation for anyone wanting to better educate and understand the lessons and reasons of a warriors mind and behavior and surviving for way of life, and living and executing combat operations in Vietnam and in Iraq.

I salute Steven Mattoon for his Dedication and Service to our Country and for sharing this fascinating story with me. I look forward to his next coming novel.

A portion of the book proceeds will go to the:
(National Ranger Memorial Foundation).

Former U.S. Army, Green Beret and Combat Veteran Regulo Zapata is the Bestsellers author of Desperate Lands: The War on Terror Through The Eyes of a Special Forces Soldier!

Regulo Zapata Jr, U.S. Army (Retired) joined the Special Forces in 1974. Since then he has participated in numerous operations in several countries.

Special Operations Sergeant Regulo Zapata will share his true story on the War on Terrorism in Africa and Afghanistan.

Regulo Zapata Jr., was a U.S. Army Special Forces Operations Sergeant with over 20 years of service with the U.S. Army.

If you know of a good book to read and share... please tell him! So he can add it to his Shelfari-Shelf on his DesperateLands.Blogspot-page!

Please post a message or comment on his "Wall" when you get a chance. He is looking forward to talking to everyone!

Please join/follow me at (Google-Follower) and DesperateLands.Blogspot page, and I will do the same for you!

This blog has no one particular direction! I'll share news on my published books, novels-in-progress, contests, things I've read, and any other stray thoughts that crosses my mind on a particular day! I'll host fellow authors, providing interviews, reviews and information on their books. Please feel free to share your thoughts, comments & questions.

My Shelfari Bestsellers & Reviews. Lets add your books to the Shelf!

Desperate Lands: The War on Terror Through the Eyes of a Special Forces Soldier